Reviews on Colette Bernardet - The artist of motion

The artist’s research of motion is meant to break into space and create new configured dimensions allowing perceptible deformation or elongation, or compressed planes with the experiment of variations, variables and torsions.
The three series are motion focused and use the void of the canvas as a flexible spatial plane subject to the gesture of the hand and the brush.
The interaction happens with the rest of the composition and its interaction with the canvas. Motion shows an increase of elasticity and curvature.
Harmony is achieved through duality and constant interaction of motion entrapment release and deployment which are the common denominators between Variation, Variable, and Torsion series.

Duality in harmony is achieved by motion entrapment release and deployment wich are the common denominators between Variations & Variables series.

A modified and repeated relationship between interlocking variables.
One of a serie of forms based on the single theme of motion(s).
A different or distinct form of motion with a change in harmony or given rythm.

A single out motion pattern, showing void dependency.
A variable is subject to change due to its fluctuating exposure to increasing or decreasing void which serves as a supporting grid (hidden variable) or a compulsory partner in motion (observable variable).

Force, elasticity and curvature.
The external gesture of the hand creates a torsion that becomes tangible on the surface of the canvas. The usage of torsion is either isolated or becomes a recorded field showing varying magnitude of the interaction induced by curve or the torsion.


The following selection of works belongs to CB's private and family collection.
Image release is granted to sylvie samani only, in view of current and future essays to be included in a forthcoming catalogue. 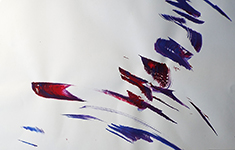 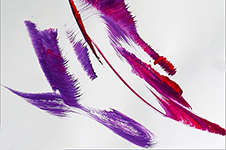