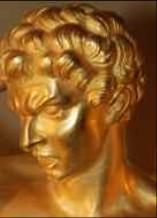 Close up of Phaeton's head in Greek mythology, driving the chariot of the sun across the heavens for one day. The horses ran wildly out of their course and he fell off. One of many variations of the popular theme illustrated both in chariot clocks and paintings.

Not all men grow with the ability to leave a lasting trail behind them.

Their ascendency on their contemporaries is indisputable and their achievements become legendary and a source of emulation.

In modern politics, men of power drive the mighty but unstable chariot of sun during their mandate, and strive against the fall into oblivion when the mandate is terminated. The rise and fall of men of power occurs faster than economic cycles, and the ephemerality of their supremacy is in discrepancy with their influence on the destiny of nations.

Men of power come from the same mould, and are generally men of stature. Their likeness lies mainly in their claiming with grandiloquence, the uniqueness of their vision. To the ordinary man, they are comparable in their persistent pursuit of power and their sheer reluctance to pass it on to others.
Few are aware, how restrictive is the granted time to shape their legacy as it should, with the intended scale it deserves.

Whether their governance lasts one day or decades, they share a variable propensity to carve their name in malleable memories and create a durable remembrance in collective memory.

Such propensity does not fade away, and is a lasting trait throughout centuries among men of power. However, the urge to be remembered as a grand ruler, requests preferably to be accomplished during their lifetime, regardless of  how transient their governance is meant to be. Once departed, the monitoring of their fame gets precarious, as it may be subject to condemnatory interpretation by plebeian memories.

In a shifting world, it is no small endeavor to conquer and hold the state of fame, least of all of glory.

Such random conquest transcends the reasonable and legitimate issues of modern politics.
The majority of men of power is rightfully concerned to propel a sustainable economy, regulate an often edgy financial arena and reduce arbitrariness. In a world of growing uncertainty and ongoing flare-ups of violence, men of power who solve such issues are highly considered; they win consensus of effervescent opinion polls, but their fame does not last centuries.

Indeed, streets, avenues, and other public spaces may proudly bear their names for a while, but names can be changed. Monumental statues erected in no time, can be thrown down carelessly or deliberately by a versatile mob. Official pictures on the walls are hastely removed, and official stamps are no longer issued. The nonrenewable stamps become coveted by saavy collectors.
The words of once admired speeches, are cannibalized or simply rubbed away by their followers.

However, during their governance, they are served by zealous scribes who produce comprehensive biographies with a glossy and colored hardcover. They flourish in the showcase of well established bookstores and are replaced by other dashing biographies introducing other rulers, eager to be remembered too.
The climbing ladder is cluttered by ambitious men of power and their loyalty to their predecessors is often challenged as they themselves challenge their influential mentors, when they turn to be less indispensable.

Names end up being listed in history books and dictionaries, reminding us that the suitors of fame are legions.
Laudable dynasties come and go with the blowing wind of change.

Centuries elapse and our malleable memory recalls mainly men of war and men of peace. The prevalence of men of war over men of peace is numbered by historians, and the names inspire unbalanced feelings of awe and respect. In theory, they all deserve to be remembered as they have contributed to forge a nation or an empire, and a culture. In reality, once they are no longer men of power or simply departed, their deeds speak for them.

How are we to measure the loftiness of their vision ? Is greatness accountable ?

Greatness is in many ways accountable, when the individual mind is highly conscious that he is the depositary of what belongs to the collective mind. Our ability to think and transmit our vision to future generations contributes to the greatness of humankind. When the duality between individualistic goals and the wellfare of collective minds recedes, when collective growth is alloted sufficient room to express itself.

When a vision coincides with universality in spite of its plurality of forms.

The royal Library of Alexandria celebrated throughout centuries remains the symbol of wealth and knowledge of ancient Egypt. In charge of collecting the world’s knowledge and diffuse it to future generations, the concept of a universal library was bound to inspire admiration and due praise, as it was meant to preserve humankind's vast thinking production from deletescence. Its greatness does not lie in the vastness of its former architecture, but in the vision that inspired it.

Museums and cultural initiatives are plentiful in the world and laudable, and yet, no one can predict which will be remembered.

Which museums will not experience the ire of destruction in the centuries to come ?

History is prolix about wise men of power who weaved a crown of glory as Art patrons.
They understood that art was a ruling tool most suitable to tailor their own glory, while propagating overseas a political message.

They prepared their legacy by making an adequate usage of art, seen as a formidable vehicle to influence the perception of their governance by their contemporaries. Art was aimed to enhance the rightfulness of a given vision that would outlive them and censor their critics. They foresaw that their policy was best advocated by art than by distracted memories. Henceforth, the Medici Funeral chapel in Florence was intended in the years 1521/1524, as a vibrant glorification of the eminent members of the family.  Interestingly enough, our perception of greatness had fluctuated since the Medici contemporaries. We glorify profusely the genius of the artists who designed it, more than we praise the patronage of the family, although its hegemony is clearly asserted.

Quite a few men of power had to reprogram a nation’s future, facing the duty to turn instability into an asset. In the fifteen century, Italy was notorious for its political unrest among patrician families. Lorenzo da Medici ruler of the city of Florence, although he was in the grip of conspiracies and febrile politics and experienced difficult relations with the Popacy, was called during his lifetime, The Magnificent, in praise of his involvement as patron of arts.

In the controversial 21st century who is labelled
Who will be the rulers of tomorrow propelling a culture respectful of their nation?

The sun King Louis XIV, experienced political turmoil in his younger days. When becoming a ruler he understood the crucial need to assert his hallmark and foster a rebellious aristocracy around him. His prodigal lavishness did not conquer a swell of opinion in his favor during his lifetime, but European courts were inspired by his artistic flair and Versailles was viewed as a paradigm of excellence. The sun king clearly materialized his political message with the inception of the château de Versailles, which four centuries later, is one of the nation’s coveted assets. The château and its artistic content, conveyed the visual message to patrician families in European courts that he was a mighty ruling monarch. Versailles became the iconic tool of centralisation of power incarnated by the monarch himself. Before him, the French king Francis the first, is remembered as a refined patron of arts welcoming leonardo da Vinci at his court.

Is it fair enough in our modern society for a ruler to welcome Jeff Koons, the worldwide celebrated artist ?
Who shall be remembered in the future ? The artist himself or the ruler ?

The history of erasure of names and linked achievements often demonstrates how frail a name stands in memories.
Is there such thing as inalterable & indestructible greatness ?
Has the original conception of greatness been altered or has it simply shifted? Nowdays, rulers of countries in transition, face the crucial need to reconstruct the democratic institutions of governance. Other rulers in mature countries have the duty to maintain our institutions, while favoring their development and adjustment. Some visionary minds work on the inception of sharing economy platforms between nations.

Cultural initiatives erected to be lasting, bridge differences both in stabled countries and troubled countries. They will not revamp or mask an imperfect reality, but will infuse a message of tolerance and peace which is a message of hope. The flawed perception of Art as the prerogative of a social elite is a reductive usage of its main ressource, which is to reconcile inner divergeant opinions, and maintain cohesion among different creeds and races whilst being a catalyst of social change. The multiplicity of interactions between Art and people, is bound to foster a dynamic of economic and social development and hence, create wealth. Cultural initiatives enrich the pride of a nation and maintain the cohesion of its people in pursuing peace while expanding its cultural sphere of influence to other nations. Art is a powerful cohesive instrument of peace needed more than ever in modern governance, and requires to be truly transformative. Piling up museums might not be enough and one wonders about the underlying strategy. Art usage and mastering requires perhaps, more subtlety than abundance when facing an inquisitive international community.