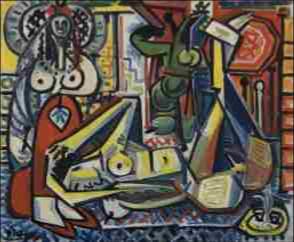 Most cubist artists and Picasso is a loud example, carried in their minds a cognitive perception of the world.

Most individuals see the world and human forms in three dimensions.
Picasso did not.
He conceived what scientists qualify as the quantum (Quanta means a share of) world composed of eleven dimensions entangled with perfect symmetry.

Out of these eleven dimensions, scientists acknowledge only four to have developed. They also acknowledge that the universe with our world part of it, keeps on expanding, which introduces a key notion on the motion ability of the universe.

Picasso had consciousness of the limitations of matter.

His perception of joint realities was based on pure geometry, expanding in different and linked spaces. One reality did not prevail but preceded the other realities.
He recomposed a global observable system, with local observables belonging to its parts, having themselves the capacity of changing states.

The multiple originals of Femmes d'alger are interpretations of superimposed realities with their changing states.